Have you been to Church lately? Sister Louisa's Church of the Living Room and Ping Pong Emporium 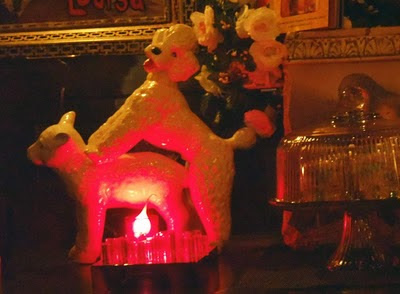 If you live in "in-town" Atlanta you have likely been invited to "Church" lately. Now, we are not talking about getting up early on Sunday morning and repenting your sins.  We are talking about outsider artist Grant Henry's new bar on Edgewood called Sister Louisa's Church of the Living Room and Ping Pong Emporium, Come on in Precious!  Yeah, that's really the name.  And unless you have been under a rock, you too can likely recite at least half of the formal title. But you can just call it "Church," as that's what everyone seems to be calling it.

I first ventured to Sister Louisa's on a Tuesday night, about 2 weeks after they had opened.  When I arrived there were literally only a handful of people hanging out at the bar downstairs.  Within an hour though, the place filled up (on a Tuesday night) and it was a full-on party both upstairs and down.  I was impressed.  Not only was this new venue pulling in curious folks to sit and have some spirits and conversation, but it was doing it on Edgewood at Boulevard.  I love this part of town and always was rooting for it, hoping it would get that special push that made it more welcoming.  And now right there at the very corner "Church" (along with Sound Table of course) is anchoring a new welcome mat and it is working. 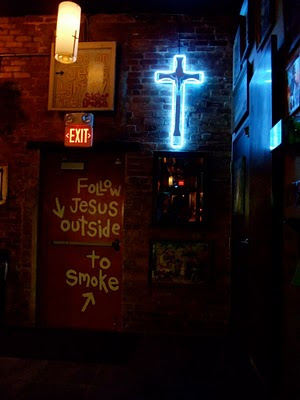 For the record: I would like to now propose that we call the block of Edgewood between Boulevard and I-85 "Ping Pong Alley" as we now have two venues (The Music Room and The Church) with active ping pong tables.
If you know Sister Louisa's art and are religious, it could definitely make you pray for our souls.  It is blasphemy.  It is satire.  But it is funny and there is a hell of a lot of truth in those words panted across the canvases.  After all, Jesus does love crack whores too.
If you look out of the windows on Boulevard, you will see not even a half block up is an old Catholic Church.  Rumor has it that a priest from this church visited Sister Louisa's on three different occasions, took photos and told Grant that "we have to talk."  I am not religious and I surely am not Catholic, but personally if a priest walked in, I think I might hide underneath the ping pong table in case lightening struck or he was taking names.  But this is exactly what draws people here.  A light-hearted satire on religion, beliefs, iconic figures and even art.
After all, what kind of businesses does Georgia have the most of?  Churches and liquor stores. Why not offer them both in one place?
Downstairs is a simple old style wooden bar with ample libations including "Good Wine"  and "Better Wine" selections, a full range of liquor and beer.  Oh yes, and the Sister's famous Sangria.  That is a must try.  It comes with a heap of fruit, so you can act like it's good for you.  They offer a small menu called "the Church Picnic" featuring faves from Homegrown like pimento cheese, hot dogs and potato salad.  And the desert is a Rubik's Cube-sized Captin Crunch/Rice Krispy Treat.  Their drinks and food are pretty cheap - keeping with Sister Louisa's welcoming hospitality.  The downstairs is anchored by a real-life confession booth from the 1800s.
But the party really starts on the second floor.  Upstairs is kinda like the room above your parents garage - if it was huge and if it was decorated by hipsters with a thick budget.  It sports a ping pong table that overlooks the corner of Edgewood and Boulevard, a real church organ (more about this later), church pews and the always coveted comfy sofas.  It's welcoming and warm and makes you feel like you are hanging out at someones home.
So about that Church Organ.  Unlike any other place in Atlanta (and probably the world), on Sunday nights Sister Louisa's turns into something you have never seen before:  A place for church organ karaoke.  What exactly does that mean?  Well, the ping pong table is put away, the church pews are turned towards the back wall and a pulpit is placed in front of the house church organ.


What happens next is quite entertaining.  A list of popular and traditional songs is handed out and a live organist plays music while people step up to the pulpit and sing to the crowd.  And a crowd it was.  The place was standing room only.  Hearing "Private Eyes" (Hall and Oates) and old Elvis songs is pretty standard in karaoke.... but to hear "Black Celebration" by Depeche Mode and "Bad Romance" by Lady Gaga on the Church Organ was pretty darn entertaining.
I recommend going to watch this at least once. It's unlike anything you have seen.  Below is the list of songs to choose from for the first week.  I am sure more will be added as the weeks pass.
The Sister is good company and she creates an environment that encourages camaraderie, conversation and relaxed fun.  This place has warmth and heart, something Edgewood (especially the Ping Pong Alley portion) has desperately needed for sometime now.  It's already changing the atmosphere of this area of town in a good way, and I am glad to have it on my list of regular hangouts.  Plus, I have honestly never had so much fun at church.
Posted by ladybird at 7:35 PM

We love Georgia. It's that simple. It sprouts wonderful music, colorful characters and memorable places. It has its issues. We can not lie. But that's all part of its complicated character
We say we love Georgia, but what do we know about it? We will take a second look at the uniqueness this state offers with stories of people and places that we see everyday but may just take for granted.
Want to contribute an idea? Write something? Get in touch.